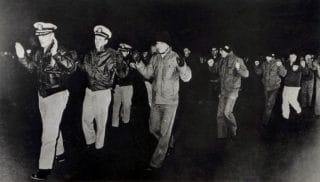 The crew and captain of the U.S. intelligence gathering ship Pueblo are released after 11 months imprisonment by the government of North Korea. The ship, and its 83-man crew, was seized by North Korean warships on January 23 and charged with intruding into North Korean waters. The seizure infuriated U.S. President Lyndon Johnson. Later, he claimed that […]

View all posts by VT →

Listen To Business Internet Radio Stations with LinkedLocalNetwork on BlogTalkRadio

To be interviewed on a radio show or if you are interested in having your own show email radio@linkedlocalnetwork.com.

Deal of the Day